One of the biggest knocks against the organics movement is that it has begun to ape conventional agriculture, adopting the latter’s monocultures, reliance on purchased inputs and industrial processes.

“Big Organics” is often derided by advocates of sustainable agriculture. The American food authors Michael Pollan and Julie Guthman, for example, argue that as organic agriculture has scaled up and gone mainstream it has lost its commitment to building an alternative system for providing food, instead “replicating what it set out to oppose.”

New research, however, suggests that the relationship between organic and conventional farming is more complex. The flow of influence is starting to reverse course.

Practitioners of conventional agriculture are now borrowing “organic” techniques to reduce the use of pesticides, artificial fertilizers and excessive tillage, and to increase on-farm biodiversity, beneficial insects and soil conservation.

All of a sudden, many conventional vegetable farms are starting to look organic. 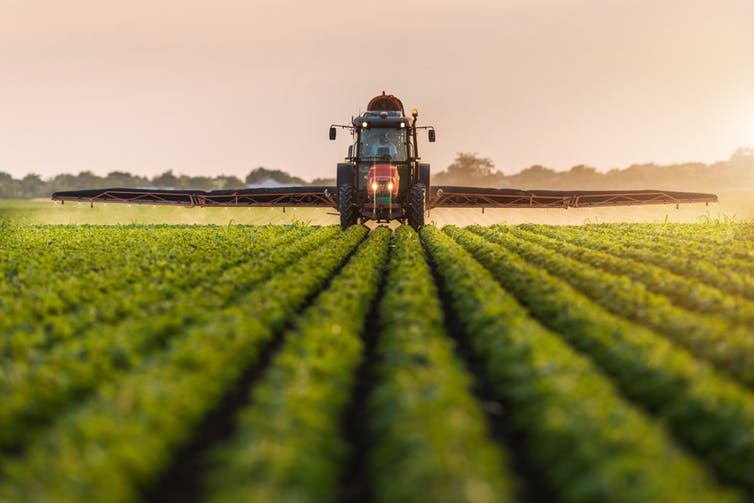 A tractor sprays pesticide on a field. (Shutterstock)

Next to nothing has been written on this subject. A rare exception is a 2016 article in the New York Times that profiled conventional farmers in Indiana who had started to use “cover crops.”

These non-commercial crops build organic matter into the soil, fix atmospheric nitrogen and add biodiversity to an agroecosystem, while allowing farmers to reduce artificial fertilizer inputs.

As organic agriculture has scaled up, it has gained credibility in the marketplace as well as on the farm. Organic farming has roots in market gardens and smaller farms, but there is nothing that prohibits organic production at larger scales.

That often means bigger farms, hundreds — or thousands — of acres in size.

This move toward the mainstream has caught the eye of many conventional farmers, who have either transitioned to certified organic production or begun to integrate organic practices on conventional plots.

Even with the upscaling, the market position of organic agriculture remains limited.

In Canada, organic sales grow by nearly 10 per cent per year, and the total value of the organic market is around $5.4 billion. Yet the reality is that the industry is still dwarfed by conventional agriculture.

There are more than 4,000 certified organic farms in Canada, totalling 2.43 million acres. But this accounts for only 1.5 per cent of the country’s total agricultural land.

Also, aside from the two organic heavyweights — coffee (imported) and mixed greens (mostly imported) — the market share of organic groceries is pretty small, at around three per cent.

Yet the influence of organics is felt well beyond its own limited market.